6 most successful projects from Kosovo being proposed for finance in the first call of Regional Challenge Fund, allocating approximately 3 million Euros for the investments in equipment, infrastructure and training at the vocational training institutes implementing cooperative training.

The Regional Challenge Fund (the RCF) organised the National Grant Award Ceremony in Kosovo on January 28th in Prishtina in order to share the results of the first call and to award the grants to winning consortia. In the first call for expressions of interest the RCF opened the call and received 205 applications from consortia of vocational training institutes and enterprises from all Western Balkan economies. The Award Ceremony took place at Swiss Dimaond Hotel and gathered the officials from the WB6 CIF, German Embassy, KfW, Ministry of Education, Science and Technology, Regional Challenge Fund and the winning consortia from Kosovo, to mark their success.

The Selection Committee`s decision about the funds available for the first call resulted in 37 projects being proposed for finance, allocating approximately 15,4 million Euros to the region. Out of this number 6 projects are from Kosovo allocating approximately 3 million Euros for the investments in equipment, infrastructure and training at the vocational training institutes implementing cooperative training. This allocation of projects represents the highest success rate in the WB6 region.

Mr. Berat Rukiqi, President of Kosovo Chamber of Commerce stated that concerns continue to relate to the labor market and the situation in the private sector with regard to the shortage of qualified labour; skilled workers are becoming one of the main obstacles to the growth of the private sector in the country. He commended the work of Regional Challenge Fund in funding the consortia and addressed special thanks to the German Government, which has been one of the country’s main partners in the development of the education sector and to the Minister of Education and Science who has been very active in supporting the VET Sector. He concluded: “These efforts show that both the government and our institutions along with donors are giving due seriousness to VET education which is crucial for the creation of new jobs and for the economic development of the country.”

“The system of vocational education and training plays an important and crucial role in the social and economic development of a country, as such, it is extremely important for Kosovo and our Government,” stated Ms. Arberie Nagavci, Minister of Education and Science. She continued that although Kosovo has had a positive economic development since the post-war period, vocational education and training has not yet managed to develop and advance in order to meet the needs of the economy with skilled workers. There is a significant imbalance between the demands of the labour market and graduates either from secondary vocational education or from higher education. She congratulated the Regional Challenge Fund on the achieved result and stated that she was honoured  to participate in the awarding ceremony for grants in Kosovo as the funding structure has been created to increase the further skills improvement of youth and to increase the quality of VET education by financing investments in equipment and infrastructure. Furthermore, Ms Nagavci stated: “As Minister of Education, I am grateful and thankful for the initiative taken by the German Bank for Development and funded by the German Federal Ministry for Economic Cooperation and Development, especially since this initiative will also serve as an incentive to strengthen the cooperation between of vocational education and training institutions and enterprises. In this way the students of the successful consortia can be offered the skills required by the labour market.”

Mr. Balsa Culafic, Program Coordinator of WB6 CIF expressed his gratitude for the first national grant award ceremony in Kosovo. He stated that CIF represents 350,000 companies, mostly small and medium sized enterprises, opening up new opportunities for stronger networking business community in the region. He confirmed that the CIF as implementation partner will support the implementation of the now selected joint projects between VTIs and enterprises and expressed his expectation that these will be followed by additional projects to be selected in future calls.

Mr. Jörn Rohde, Ambassador of the Federal Republic of Germany in Kosovo stated that all economies in the Western Balkan 6  face the same challenge of a lack of skilled labour. While the Regional Challenge Fund may not be able to solve all problems, it is a lightning rod for the fact that companies and vocational training institutions cooperate in this regard. Mr Rohde further said: “I am really happy that 26 applications out of 205 for the whole region and 6 selected projects out of 37 come from Kosovo. Through the support of the Regional Challenge Fund skilled labour is being kept here and trained here in Kosovo, and we can expect an increase in cooperation between the VET institutions and companies. I think it’s a win win situation for all the stake holders and I hope that this program is going to continue with more successful calls in the future.”

Mr. Rene Eschemann, Director of KFW Office in Kosovo recalled that at the launching of the first call reference was made to the alliance of the willing. He added: “Today we have the first members of this alliance and I would like to congratulate the 6 winning consortia from Kosovo that have won in the first call of the Regional Challenge Fund.” He addressed the grantees by saying: “Now the expectations are high, not only from us, but more important from the young people that will participate in your programs with the hope that they will equip the skills and qualifications to be fit for the jobs. Of course, expectations of the companies will also be high towards these young people that they will adapt to the program and develop in a nice way. But this has to be rather understood as a motivation, as an engine, to endeavor and develop your training for the needs of the companies and labour market. We have 6 projects from Kosovo for which are allocated 3 million euro for financing. Compared to the size of the economy and population, I would say this is a very remarkable result.”

The Regional Challenge Fund is an innovative program that seeks to increase the productivity and competitiveness of businesses in the Western Balkans 6. The RCF is commissioned by the German Federal Ministry for Economic Cooperation and Development to KfW Development Bank and executed by the Western Balkans 6 Chamber Investment Forum (WB6-CIF), a joint initiative of chambers of commerce from the region. 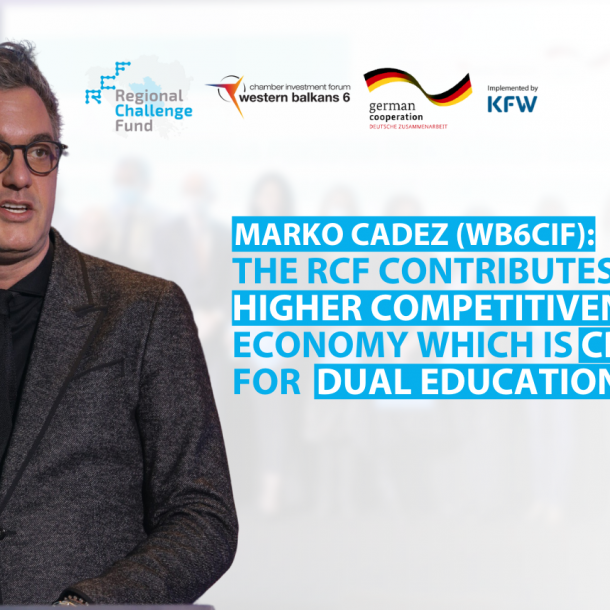 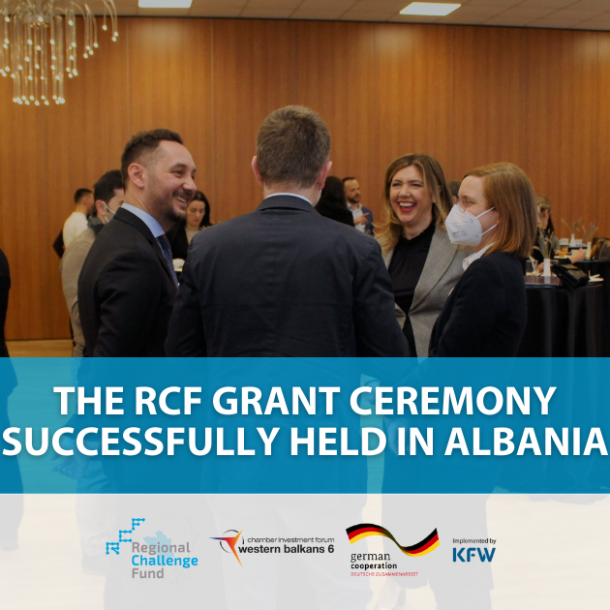 The RCF Grant Ceremony Successfully Held in Albania
Next Article