The Regional Challenge Fund (RCF), a unique instrument designed to increase the employability of citizens, primarily youth, as well as to facilitate the competitiveness of businesses in the Western Balkans 6 by financing investments in equipment and infrastructure for selected dual or cooperative education projects, announced the first regional call for support to projects focused on improving cooperative and dual education, open from February 01 until April 30, 2021. The first round of applications attracted up to 205 consortia from all six economies of the Western Balkans. As a result, the first phase of the Regional Challenge Fund project was successfully completed, supporting investments in dual education projects. In total, 37 projects from the Western Balkan region will receive grants worth EUR 200,000 to EUR 600,000.

The awarded consortia consisting of educational institutions and businesses that set up a partnership aimed at the development and implementation of dual or cooperative education were proposed for financing within the first phase of the Regional Challenge Fund project, for investments in equipment and infrastructure works in educational institutions, as well as for financing training of personnel in schools and businesses. Furthermore, the funds will also be allocated to adapt and refurbish classrooms, workshops, and laboratories.

On the occasion of the Award Ceremony organized by the RCF in Belgrade, Mr. Marko Cadez, President of the Board of Directors of the Western Balkans 6 Chamber Investment Forum and President of the Chamber of Commerce and Industry of Serbia, pointed out that the Regional Challenge Fund project contributed to the higher competitiveness of the local economy and emphasized its relevance for the education of young professionals via dual education. He invited governments from the region to work together toward improving the educational system reforms because that brings inevitable benefits for the economy.

“Employers still cannot find enough qualified workforce, which is a major restrictive factor for faster economic growth. There are still around onemillion unemployed people in the region, and the rate of unemployed youth ranges between 24% and 49%, depending on the economy.“

Čadež said he was pleased with the strong interest of companies in the Regional Challenge Fund project, adding that the total of 205 consortia that applied for the funds included more than 600 companies from all industrial sectors. He also thanked the German Federal Ministry for Economic Cooperation and KfW German Development Bank for their support, underlining that Germany is one of the largest investors in the region.

H.E. Thomas Schieb, Ambassador of the Federal Republic of Germany to Serbia, said that Germany has a long tradition of dual vocational education as an important factor to provide enterprises with qualified, motivated staff and to give young people a good basis for their professional career. “Based on that experience, we are firmly convinced that long-term cooperation between companies and vocational training institutions is an important basis for a sustainable, strong economy. Therefore the German development cooperation is supporting the Western Balkan region in enhancing their dual education systems. To this end, the German Ministry of Economic Cooperation and Development (BMZ) through KfW has made available €38.5 million so far to promote the Regional Challenge Fund (RCF) as a new instrument to promote employability in the WB region in cooperation with the regional Chamber Investment Forum.” – added he.

At the Ceremony announcing the selected consortia within the first phase of the regional Challenge Fund, the projects that would receive the funds were presented, and the relevance of financing such projects for further development of the business sector and economy of the Western Balkans was underlined. Mr. Balsa Culafic, RCF Project Coordinator from the WB6CIF, and Mr. Frieder Woehrmann, Team Leader of the Fund Management Unit of the RCF, officially handed over the Award Letters to the most successful consortia from the region.

The Regional Challenge fund is financed by the German Federal Ministry for Economic Cooperation and Development (BMZ) via KfW German Development Bank. The main implementation partner is the Western Balkans 6 Chamber Investment Forum. 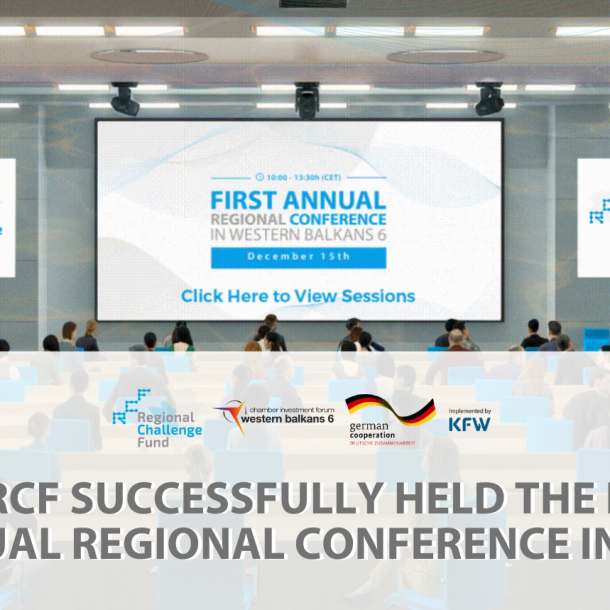 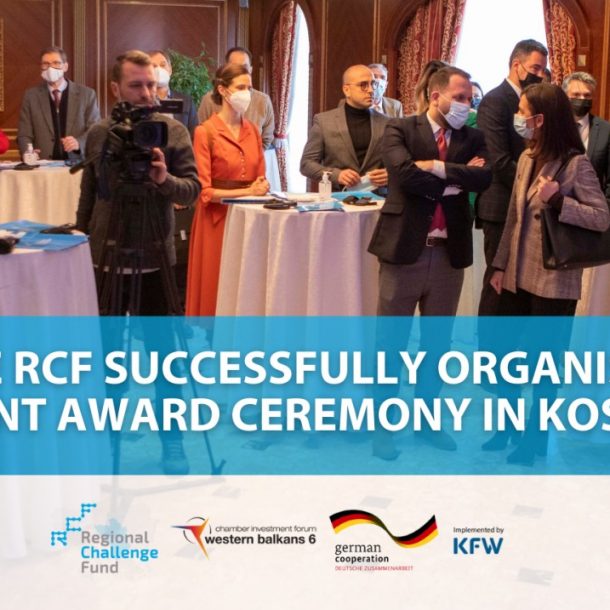